Study of the movement of liquids in tanks by the SPH method to simulate movement of fluid into said tanks which can be passive stabilizers tanks, or directly LNG tanks. The stabilizer tanks are used successfully in both fishing and cable vessels to absorb their balance. These tanks are filled with salt water to a level at which has produced a gap with the roll motion of the ship that makes the point that produces the fluid counteracts the external torque produced by the waves. The most important thing is being able to predict this gap. Simulations are made with a own code which has been developed by the Group and they are contrasted with experimental campaigns. From the theoretical point of view CEHINAV is working on the analysis of viscous terms usually used in SPH simulation of viscous flow and the boundary conditions on the simulation of these kind of viscous flows . The Group has a self-developed code based on SPH and GPU technology. 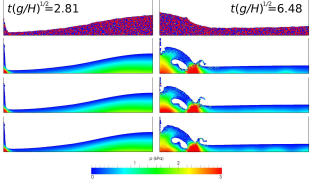